Yesterday’s disastrous visit of the American President must enormously weaken the hand – or at least the argument – of the Brexiteers among us. They were relying on a trade deal with the USA to compensate for our lost ‘free trade’ with the remaining countries of the EU. That was always a flawed ambition, with any prospective British-American trade amounting to only a fraction of the trade we will have lost with our present European partners, and subjecting us to poorer standards than we can now insist on: American ‘chlorinated chicken’ is the example usually given. Within the EU, of course, we can insist on higher quality food (and other things) than we would be able to do if we relied on free and unregulated trade of the kind the Americans would like. Trump’s now notorious interview in yesterday’s Sun newspaper, where he claimed that Theresa May’s current Brexit proposals would, by adhering still to EU standards, rule out any trade deal with him, at any rate, spelled this out more clearly than perhaps he realised. He obviously thought he was strengthening the hands of the Brexiteers, and particularly of his new British buddy Boris Johnson, who had just resigned over May’s plan.

He then added insult to injury by telling the Sun that May’s rival Boris would make a ‘great prime minister’. (Take that, Theresa!) His affection for him seems to be entirely due to the fact, as he said, that ‘he’s been very nice to me, he’s been saying very good things about me as president. I think he thinks I’m doing a great job. I am doing a great job, that I can tell you, just in case you hadn’t noticed.’ So that’s the way to get round him: flatter his narcissistic streak, which appears not to be founded in any great self-confidence, if it needs to be continually stroked like this.

Later, at Chequers, having clearly been told by his advisers of the harm these remarks had done, he tried to make up for it by heaping oleaginous praise on poor Theresa (I never thought I’d feel such sympathy for her!), and claiming that the Sun’s report of the interview had been ‘fake news’ – even though it had been recorded and shown to be accurate. How can you deal – or do business – with this man? Best to scuttle back under Europe’s wing.

If he needs to be flattered, he won’t have felt much affection towards the UK in view of the enormous – 250,000? – demonstrations against his visit that filled London and other major cities yesterday, and are the most newsworthy aspects of the whole event. Today’s Daily Mail paints these as the usual rent-a-crowd Lefty snowflakes, but they clearly represented far more than this. They literally filled the streets from the BBC to Trafalgar Square, and beyond that to Parliament Square: young and old, white and black, men and women (the separate Women’s march that fed into the main one was particularly impressive), Left and moderate Right. Apart from showing how thoroughly despised Trump is by most Britons, they also illustrated the creativity of the new generation of protesters in Britain today, with some bitingly humorous placards (my particular favourite was ‘Free Melania!’), and of course that wonderful baby-Trump dirigible.

This whole affair was unprecedented. Although the demos were kept well away from him, with all the meetings being held outside London – fancy a foreign leader having to be quarantined to this extent! – and despite the fact that the government put on a show of military pomp and circumstance of the kind he apparently likes in order to pander to his vanity, he must have been aware of the far more significant protests beyond his sight and hearing. Fox News must have covered them. That won’t warm him to us, or consequently do much for Britain’s chances of surviving alone in the wider world, when we’re cut off from the Continent. Brexiteers claim we are a ‘colony’ of Europe right now. Believe me, existence as a dependent ‘trading partner’ of America, on her terms, will feel far more ‘colonial’. (And I write as a historian of ‘imperialism’.) That’s one of the things the EU was supposed to protect us against.

He’s now in Scotland, at one of his ghastly golf resorts. Kajsa and I were in Edinburgh without our laptops this last week (hence the brief silence), where opinion is even more anti-Trump, despite his maternal roots on the island of Lewis, and his claim that everyone loves him there. He made the mistake – yet another one – of claiming that Scotland had voted for Brexit. It didn’t. Another reason why it shouldn’t be dragged out of Europe on England’s coat-tails.

I may blog about Scotland later. In the meantime, enjoy your chlorinated chicken. 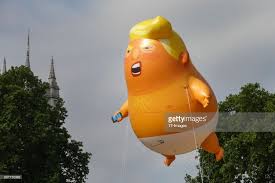