I’ve posted about our (British) voting system before: https://bernardjporter.com/2016/02/29/first-past-the-post/. Here’s an interesting piece put out by STV, showing how the British and Swedish parliaments would look under each other’s systems. It’s in Swedish, but I’m sure you’ll cope.

Of course, this doesn’t take on board the likelihood that British voters would vote in different ways if they had proportional representation. There would be fewer ‘wasted votes’, for example. And it would be easier to form new parties. – Incidentally, one of the main arguments in favour of our British (and US) ‘first past the post’ system, I remember, used to be that it produced more stable governments. That doesn’t seem to cut much ice today.

Tomorrow week we have our general election here in Sweden. It looks as if it will be close. We’ll see how it works out. My first impression of the electioneering on TV is that it’s far more polite and cerebral than in Britain. Also, of course duller, for those who would like their elections to draw blood. The election posters are dire – none of those ‘evil eyes’, or queues of Turks. Just a face and a milky-mild slogan. That’s good Swedish manners for you. 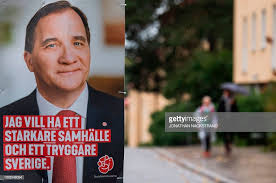