What President Trump could do with now, while his travel ban is suspended by the courts, is a Reichstag fire, and an immigrant close at hand to pin it on. He’s almost said as much: ‘if anything happens now it’s the judges’ fault’. It doesn’t have to be the Federal Capitol; it could be almost anywhere public (Trump Tower?), but it has to be blamed on a recently-arrived Muslim refugee. (Preferably one that is shot dead in the course of his arrest – the typical American way – so he can’t be questioned too closely.) I wouldn’t put it past either Trump’s people or the Islamic terrorists to arrange this; both sets of extremists, after all, want the same thing – to ratchet up the ‘war’. Let’s hope to God it doesn’t happen.

Of course this isn’t 1933, and Trump (it needs to be emphasized) isn’t Hitler. For those who scoff at that comparison, however, two points need to be made. Firstly, German Fascism didn’t begin with the death camps. Hitler’s first solution to the ‘Jewish problem’ was to boot them all out. This didn’t make him any less Fascist. Secondly, take a look at this poster, currently displayed in the US Holocaust Museum in Washington. I don’t know its provenance, but still. Trump ticks every one of these ‘early warning signs’. 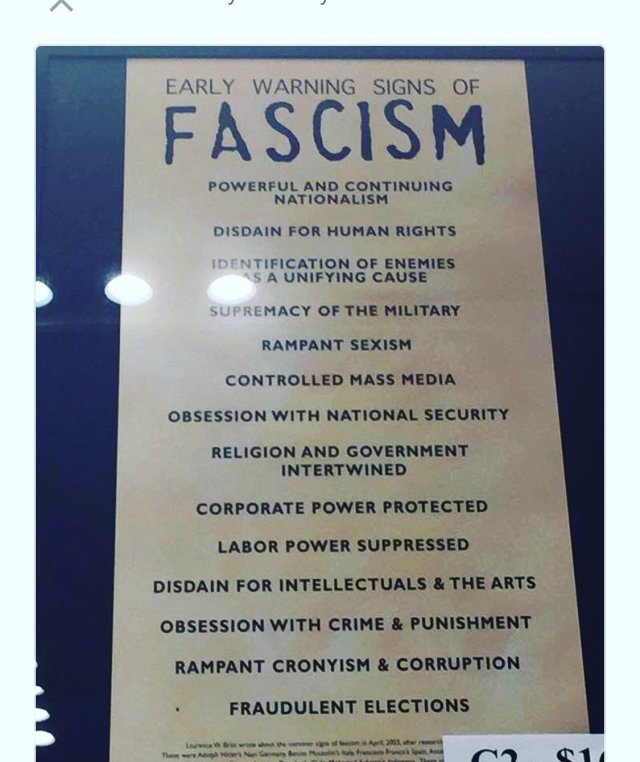 So aren’t we right to be vigilant, even afraid?