With Dominic Cummings in the news this morning as the supposed evil genius behind Sajiv Javid’s surprise resignation as Chancellor – thus enabling Boris’s absolute control of government, on the way to Dominic’s ultimate vision of a new quasi-Fascist(?) way of governing – I thought it might be worth re-posting this earlier blog of mine, originally entitled ‘Separated at Birth?’ 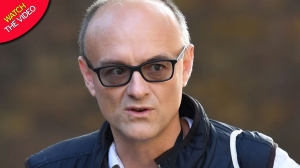 That’s Dominic (Demonic) Cummings on the left, and the evil Mekon on the right. Remember Dan Dare? I imagine many won’t; which is probably why this rather obvious analogy – as I thought – didn’t catch on.

I’m becoming very depressed about the scale of both Johnson’s and Trump’s successes. Dominic, in his diabolical way, was clearly right. Questions of ‘character’ don’t matter to half, at any rate, of the British electorate, just as they don’t matter to Trump voters in America. Have you seen those TV programmes featuring Trump’s rallies and interviews with their unbelievably stupid ‘fans’ bussing around the US to follow them…? After one of them last night I found myself wishing that that that flaming asteroid heading for the Earth so beloved of Sci-Fi disaster movies really would crash into us and force humanity to start all over again. The Mekon could be driving it.

One of the keys to both Trump’s and Johnson’s present successes appears to be the optimism  they give out: ‘MAGA’, and the ‘sunlit uplands’; however false that optimism turns out to be in the end. By that time we could all be Dom-dominated, robotic Treens. And without any Therons from the other side of the planet to help us out. (Anyone not brought up on the Eagle 60-70 years ago will have lost me there.)

1 Response to Journey to Mekonta