I rarely travel by first class train, but I thought I’d allow myself the luxury for the last stage of my exhausting journey from Stockholm to Hull on Tuesday. (It was only £10 extra, and you get a free meal.) Who should I find sitting over the aisle from me but John (now Lord) Prescott, former deputy prime minister, and that very rare specimen – a working-class Labour MP – before his elevation. He used to be a merchant seaman, then a TU organiser, before Ruskin College Oxford – that great portal into higher education for the plebs – and on to university. He was one of our local Hull MPs until recently. I always liked him; all the more for the way he was looked down on by the Tory snobs. I won’t tell you what we talked about – it was mostly mutual friends – except to say that he’s clearly on Corbyn’s side in these present Labour wars. Good man. (He’s the one on the left here.) 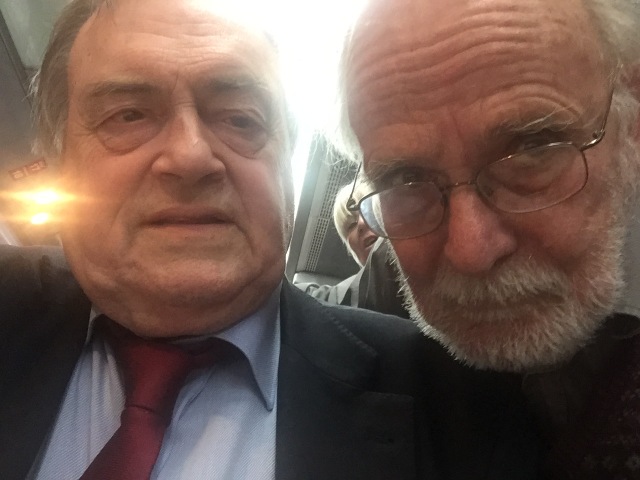 (Selfies are rather naff, aren’t they?)

Since arriving back I’ve been gathering documentation in support of my application for Swedish citizenship. (Proof of earnings, evidence that I’ve never been a welfare burden on either State, a list of my absences from Sweden over the past 23 years, etc…) I hope to get it done by the time Kajsa arrives to join me in Hull, at the end of next week. And when Erika – my case officer at Migrationsverket – returns from her ‘semester’. – Ski-ing, I presume. Will it count against me than I’ve never got the hang of Swedish cross-country ski-ing? That’s in spite of my being fairly competent at the downhill sort. It’s the boots. They’re too loose at the heel.

I’ll resume regular blogging when all this is done. I’d like to comment on the ‘Labour anti-semitism’ thing, but I’ve done that to death in previous posts. All I can add now is: why can’t Corbyn’s enemies give us just one example? Of genuine anti-semitism in the Labour Party, that is; not of criticism of Israel’s present ultra right-wing government. I’ve not seen a single one.