Written in my diary for 19 May are the words: ‘Royal Wedding. Be out of country.’ ‘Out of country’, of course, meant Stockholm. But now I find I won’t be able to avoid it even there: https://www.facebook.com/events/813022998888560/. So I’ll probably stay in England and bury myself under the duvet all day.

It was the British ambassador himself who alerted us to this, at a meeting of ‘Brits in Sweden’ called last week at his Residency, to discuss Brexit-related problems. (See pic below: I’m hovering in the corner at the back; Kajsa just in front of me, talking earnestly to the Political Attaché; the ambassador with crossed hands back right.) The ambassador was of course diplomatic on the issue of Brexit – when I said something mildly uncomplimentary about Boris, he said ‘Steady on, that’s my boss you’re talking about!’ – but gave the impression of wanting to help us poor expatriates. Kajsa says the coffee was the best she has ever tasted.

About 20 of us attended, out of a total 30,000 Brits living in Sweden – though I’m not quite sure what ‘living’ means. (Short-term? Long-term? Accredited residents?) A show of hands revealed that 70% of us were applying for Swedish nationality.

What jarred with me a little – apart from the Stockholm street party – was the image the Political Attaché had on the back of his visiting card: 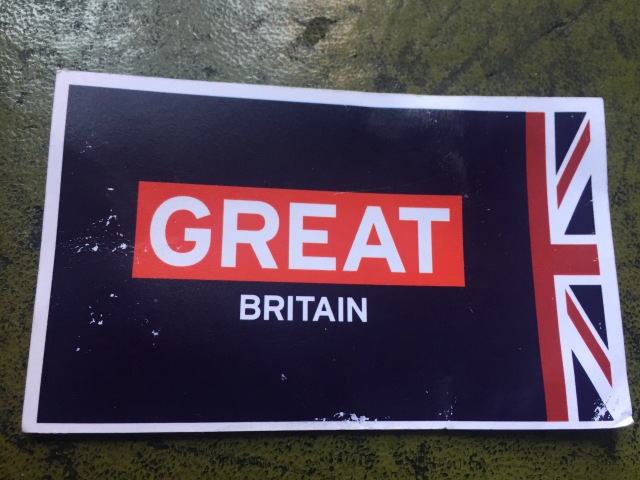 Cringeworthy, I thought. And in any case ‘great’ in this context doesn’t mean that. See https://bernardjporter.com/2018/02/06/make-britain-great-again/.