What a difference a couple of hours can make. I came home from the Corbyn rally in Hull yesterday evening quite pumped up, as one does from these warm shows of solidarity. Yes, I know it’s all false; but the crowd was huge, and Corbyn’s speech excellent, even inspiring. (Neither made it on to national television.) Theresa May’s ‘U-turn’ on social care that day, and a dire performance under scrutiny from Andrew Neil on TV, seemed to have knocked her back significantly, with Labour catching up in the opinion polls. For the first time I felt we had the dreadful woman, if not quite on the ropes yet, at least staggering towards them. There was a spring in my step as I downed my post-rally pint at the pub, and made for my taxi.

Then came the news from Manchester. I know I should have my mind filled now only with deep sympathy for the poor victims of this diabolical attack, instead of thinking, as I did with at least part of my mind, of its political consequences; but I fear that those could be dire, and will favour May. That after all is what terrorists – if that’s what the Manchester bomber was: we don’t yet know for sure – aim for: to provoke a political reaction, and so more oppression of them, in order to illustrate their oppressors’ Islamophobia (in this case), and so justify their cause. It’s disheartening how often governments fall into this trap. (Vide Bush Jr., and Donald Trump.)

May has been making a great pitch in this campaign – almost her only pitch – of being ‘strong and stable’, by contrast with the supposedly weak Jeremy Corbyn. Her prat-falls yesterday somewhat undermined this image – opponents started replacing her mantra with ‘weak and wobbly’; but the original one will have stuck in people’s minds – it is bound to have done, it has been repeated so robotically – to emerge again in any situation in which ‘strength’ would appear to be called upon. That’s what Manchester may have done

The ground had been well prepared beforehand. For a few days now the tabloid press has been filled with accusations against Corbyn going back to the 1970s, that he was in favour of IRA terrorism. (Of course he wasn’t; only equally condemning of atrocities on the other side, and broadly sympathetic to the cause of Irish unity.) Yesterday the Sun came out with a huge front-page headline, with reference to this IRA business: ‘BLOOD ON HIS HANDS’. Today the same paper directly and ‘specifically’ attributes the Manchester killings to Corbyn’s and McDonnell’s – these ‘snivelling IRA fanboys’ – ‘sucking up to the IRA’. May’s reputation for ‘strength’ seemed to be disintegrating; so the way to shore it up was to emphasise Corbyn’s contrasting ‘weakness’, and indeed treachery. (May had just accused him, in a speech, of ‘not loving Britain’.) Terrorism requires ‘strength’ to combat it. (It doesn’t.) May’s rhetoric, whatever the reality, may persuade the electorate that only she can ‘stand up against’ it. So, having got May on the run, as I was daring to think at the rally yesterday, our hopes are shattered, at a blow.

The Manchester bomb was almost too convenient for her. There is obviously room here for conspiracy theories to ferment, darkly. Was it a ‘false flag’ operation, by a Tory or MI5 agent provocateur? Such things have happened, though usually on a lesser scale. Did the Tories and the Sun have some precognition of the Manchester Arena atrocity? If so, did they deliberately let it play out, instead of scotching it? I prefer to believe that May has simply been lucky, at a terrible cost to those poor Mancunians. But then I’m always anxious, as you may have noticed, not to be labeled a ‘conspiracy nutter’.

To cheer us all up, here’s a pic I took at the rally. Don’t show the Daily Mail. 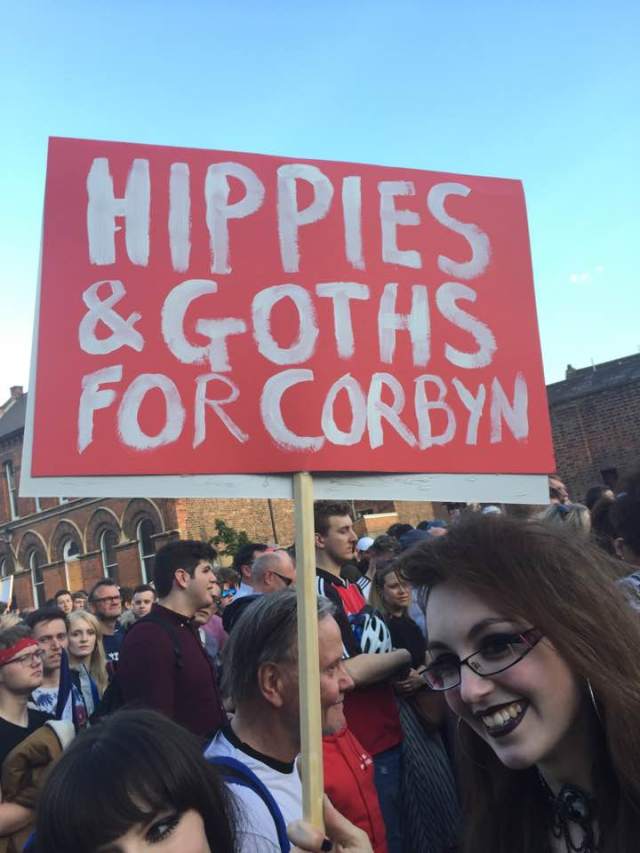 6 Responses to Manchester and May